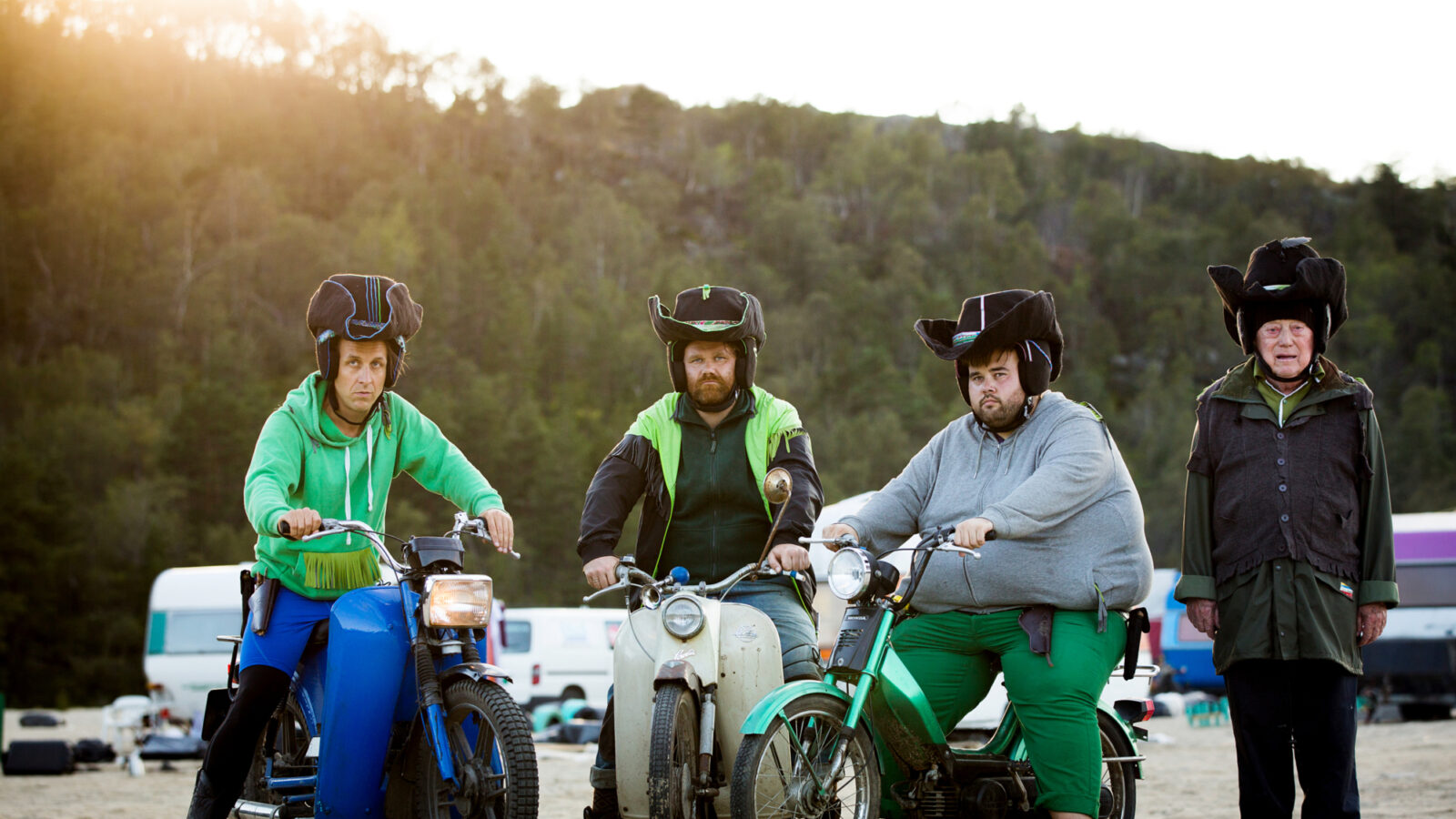 This year&#039;s opening film at Oslo Pix is ​​Joern Utkilen&#039;s first feature film Vann over ild. Get to know the characteristic director below.

Oslo Pix opens with 47-year-old Joern Utkilen first feature film Vann over ild. The film received four and a half million Norwegian kroner in support from NFI’s Nye Veier programme in 2015, and spins on the same themes as his short films with odd characters, humour and underlying critic of the society. Utkilen lives in Glasgow, Scotland, and has made short films in both Norwegian and English. His film Asylum was nominated for Amanda and won an award at Bergen International Film Festival in 2011, while Little Red Hoodie was nominated for a Scottish BAFTA in 2009. His last film was the documentary Statement Too in 2016 about the cult musician Arvid Sletta, who participates on the soundtrack on several of Utkilen’s films.

Vann over ild contains many of the classic western elements, but the horses have been replaced with old mopeds, the prison is a caravan that has seen its best days, and the local company is a mine that produces plastic pellets. Anyhow, the citizens have become so rich that they don’t bother to work either way, an absurd metaphor of the welfare in Norway. With this as a backdrop, a stranger (Kristoffer Joner) rides into the city. Soon he rises to power in the small community.

The film is set in the old mining community Knaben in Kvinesdal. A place that ended up as the location because of fact that is one very few places in Norway where there exist a dessert.

This is your first feature film. How has the transition from making short films been?

–It has been a challenging process. When I was confronted with myself and the way I work for such a long period of time, I ended up thinking a lot about what I’m really doing. Why do I make movies? It has been a very interesting process and makes a focus for the future.

In the cast of Vann over ild we find several of the most well known actors from Rogaland County. In addition to Stavanger characters like Kristoffer Joner, Nina Ellen Ødegård, Arthur Berning and Ole Christoffer Ertvaag, Jørgen Foss is among the actors. This is his first role since he played the title character in Pitbullterje in 2005.

Tell me about the cast to the movie. Why did you choose these specific actors?

–The starting point for the movie was conversations with actors, about themselves, their lives, thoughts and dreams. The actors were then selected, as ideas from these conversations headed the script's direction. Both the script and the characters are inspired by the conversation with the actors. They were chosen to play the story they themselves had inspired.

Film nestor Kalle Løchen has compared Utkilen with names such as Wes Anderson, Todd Solondz and Roy Andersson. He himself is unsure if he is influenced by other filmmakers:

–I'm unsure whether it's right to say other filmmakers influence me. It can be easy to believe it, since I, like everyone else is attracted to what I like. I think it's more accurate to say I share the same reflection of the world with some filmmakers, and therefore tend have similar elements in my films as they have. But of course it is clear that I watch other filmmakers and is curious about what they are doing and what their interests and focuses are. But everything is only interesting if it fits into what I do.

Do you feel that there are specific similarities in all your films?

–It's probably easier for others to see, but I've understood that I'm using the movies I make to express my view of something I don’t like. And I will give the viewers insights into these things I don’t like.

How do you view Norway as a film nation from your base in Glasgow?

­–I see Norway as a really exciting place for filmmaking. It is possible that I’m affected by my participation in NFI’s Nye Veier programme, where I have seen how many interesting and talented filmmakers there are in this country. This is not always reflected in feature films. We need such a playroom with proper budgets for filmmakers in Norway.

As a warm-up to Vann over ild, it is highly recommended to take a look at Utkilens Vimeo account, where you can see several of his absurd short films from his early career. Especially recommended is the hilarious Size 5, about the importance of the size of a football.